We are a month into LockDown III.

Is there any light at the end of the tunnel?

Here is the reported UK data.  As feared the Third Wave was worse than the First and the Second, and the cumulative mortality has exceeded 100,000 souls.  But the precipitous fall in reported positive tests is encouraging and it looks like the mortality curve is also turning the corner.

The worst is over.

So, was this turnaround caused by Lockdown III?

It is not possible to say for sure from this data.  We would need a No Lockdown randomised control group to keep the statistical purists happy and we didn’t do that.

Is there another way?

Yes, there is.  It is called a digital twin.  The basic idea is we design, build, verify and calibrate a digital model of the system that we are interested and use that to explore cause-and-effect hypotheses.  Here is an example: The solid orange line in the chart above (daily reported +ve tests) is closely related to the dotted grey line in the chart below (predicted daily prevalence of infectious people).   Note the almost identical temporal pattern and be aware that in the first wave we only reported +ve tests in patients admitted to hospital. 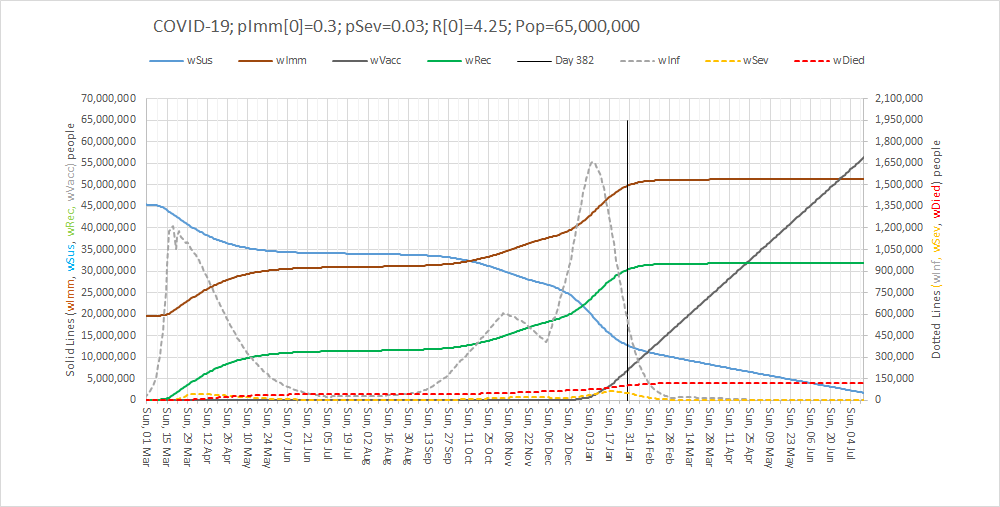 What does our digital twin say was the cause?

It says that the primary cause of the fall in daily prevalence of infectious people is because the number of susceptible people (the solid blue line) has fallen to a low enough level for the epidemic to fizzle out on its own.  Without any more help from us.

And it says that Lockdown III has contributed a bit by flattening and lowering the peak of infections, admissions and deaths.

And it says that the vaccination programme has not contributed to the measured fall in prevalence.

What are the implications if our digital twin is speaking the truth?

Firstly, that the epidemic is already self-terminating.
Secondly, that the restrictions will not be needed after the end of February.
Thirdly, that a mass vaccination programme is a belt-and-braces strategy.

I would say that is all good news.  The light the end would appear to be in sight.

Posted in Diagnosis, Examples, HCSE, Healthcare | Comments Off on End In Sight